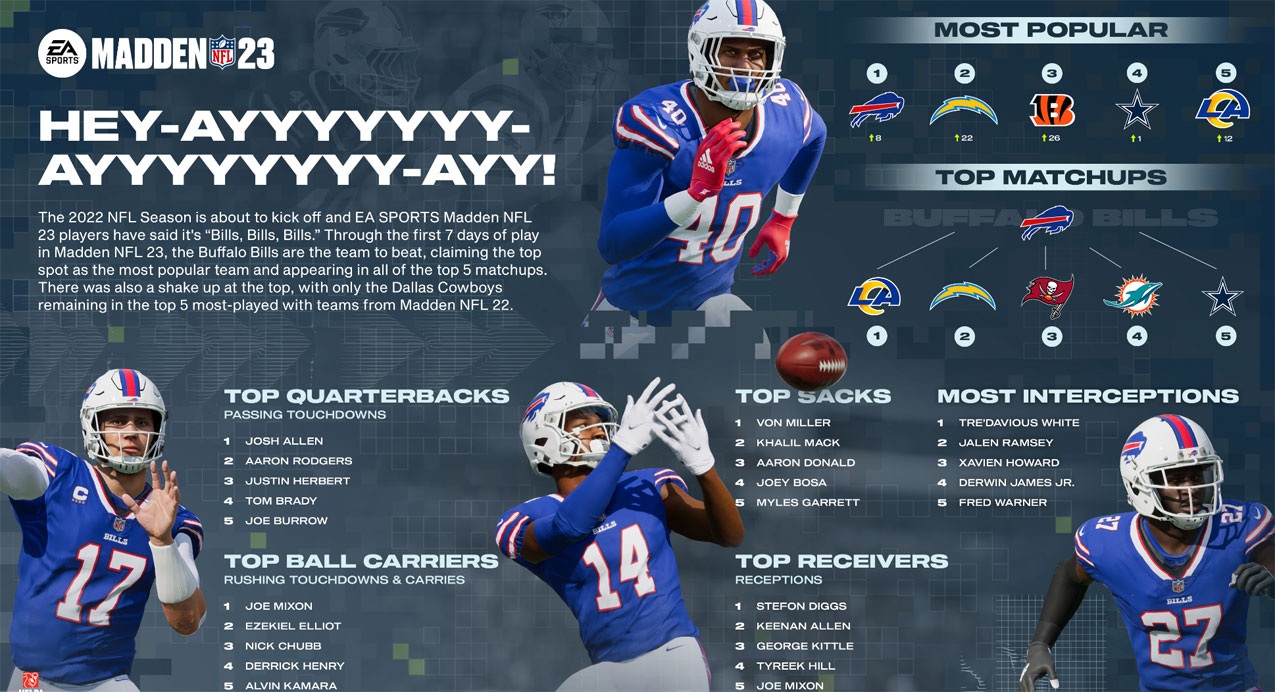 To kickoff the start of the 2022 NFL season tomorrow, Madden NFL 23 will be free to play this weekend, September 8 through September 11on Xbox One, Xbox Series X|S, PlayStation 4 and PlayStation 5.

Read the full press release below:

REDWOOD CITY, Calif. Electronic Arts is celebrating the start of the 2022 NFL Season by inviting football fans everywhere to play EA SPORTS™ Madden NFL 23 via a global trial*, during a Free Play Weekend, September 8 through September 11 on Xbox One, Xbox Series X|S, PlayStation®4 and PlayStation®5. Fans can experience the game changing impact of the FieldSENSE™ Gameplay System in the PS5™ and Xbox Series X|S versions, which helps make Madden NFL 23 “the best-feeling game in the series” according to Bleacher Report. Fans can also explore new Free Agency and Contract enhancements in Franchise Mode, the Madden Legacy Game that celebrates Coach John Madden and much more with the option to purchase the Madden NFL 23 All Madden Edition at up to a 25 percent discount at any point over the Free Play Weekend to keep their Madden NFL 23 fun going.

Madden NFL is one of the longest running annual gaming franchises and over the last three years, more players than ever have been playing the game. Continuing that trend with the latest release, Madden NFL 23 saw a 30 percent increase in games played during week one of launch compared to Madden NFL 22.

“Our team is passionate about creating the best experience for our players every time they start up Madden NFL 23 and we never stop improving the game after its release,” said Seann Graddy, Executive Producer, EA SPORTS Madden NFL “We’ve seen so much positive response to things like our new gameplay system, FieldSENSE and other features since launch and we look forward to continuing to deliver the best simulation football experience with new content throughout the NFL season.”

Through their increased play, Madden NFL players also overwhelmingly declared the Buffalo Bills as the team to watch this season as the Bills saw a 115 percent increase in usage compared to Madden NFL 22, making them the most popular team in the game. On top of being the most popular team, the Bills appeared in all five of the top most-played matchups with the Rams, Chargers, Buccaneers, Dolphins and Cowboys as their most common opponents. On the players’ side, Josh Allen racked up the most passing yards and touchdowns of any quarterback, Stefon Diggs was the top receiver, newly traded Von Miller led in sacks and cornerback Tre’Davious White claimed the most interceptions.

Alongside the Free Play Weekend, a Title Update lands in Madden NFL 23 this week with fresh improvements based on player feedback and new content, including ‘CHECKMATE’ by two-time GRAMMY® nominee Cordae and 3-time GRAMMY® winning writer/producer/rapper Hit-Boy. The track will debut first on the Madden NFL 23 Soundtrack in-game, arriving with another new track, “NO LIMIT’ by Money Man, Babyface Ray & Key Glock ft. BLEU from the kingpins at Empire.

Tonight at 6:30pm ET on Twitch and YouTube, the Madden NFL 23 Championship Series (MCS) Ultimate Kickoff tournament officially kicks off and Friday, September 9 at the same time fans can tune in to see who will win the first MCS Major of the season. Madden NFL 23 will also be onsite at the 2022 NFL Kickoff Experience in Long Beach, CA tomorrow welcoming football fans to get in the game.

* Limited time free trial. Trial time is subject to change and may vary by platform. Persistent internet connection, EA account, and acceptance of EA User Agreement (terms.ea.com) and Privacy & Cookie Policy (privacy.ea.com) required to play. Access on console platforms may require a premium console account. Additional in-game content may be available for purchase and is available for continued use in the full game; purchased content will not be refunded upon completion of the trial. Trial can be played once per EA account.